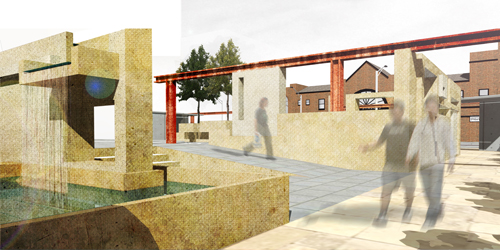 This project was created with the ambition to increase the permeability of the site. The scenario was to include all current and future local developments in the design. Furthermore, the project was based around a forecast that we researched, to do with the movement of artists around the city and how they act as a catalyst for the regeneration of an area. Running from Lydia Ann Street to Renshaw Street, and from Roscoe Street to Hanover Street, the Rope Walks was once full of affordable artist studios and workplaces. As it became the “place to be” wealthy business took the place of the artists as the rent became too expensive. These artists are now culminating in the Baltic Triangle. The Baltic Triangle is an historic central area, which is enjoying a steady renaissance making it one of ‘the’ places to set up shop and hang out. As this happens we forecast that the same scenario that happened to the Rope Walks area will also happen to the inhabitants of the Baltic Triangle.

With investment from an Arts Organisation, who want to explore the cultural and creative potential of the existing urban fabric, we created a master plan that will accommodate the needs of the art community that are continuously being pushed out of the city centre. The design is phased, each phase creating a positive ripple effect on the area and its surroundings.